Seafood and it’s benefits for the whole family…

Another fantastic article from freelance writer, qualified nutritionist and fitness instructor Helen Bowes on the benefits of Seafood for the whole family…

Fish has long been referred to as “brain food,” and in the last couple of decades, scientific research has finally started to discovery just why fish has this reputation. Many studies show that omega-3 fatty acids are important for good health, and also that a high proportion of people don’t get enough of these essential fats in their diet. This goes for children as well as adults; but luckily there are easy ways to get more of these important nutrients. Fresh, tasty fish like salmon and other fatty fish are high in omega-3 fats, and make a great addition to a healthy diet. As well as this important benefit, fresh and tinned fish are rich in many other health-promoting nutrients, including several essential vitamins and minerals.

The Benefits of Omega-3 Fats in the Diet

Many scientific studies have been conducted to determine what kinds of health benefits can be gained from omega-3 fats and fish oils; the results indicate that these fats may reduce the risk of prostate cancer and Alzheimer’s disease, enhance the memory, and provide protection from depression. There is also plenty of evidence that omega-3 fatty acids of the kind found in fatty fish may have wide-ranging benefits for children. For example, children with ADHD are more likely to be deficient in omega-3 fatty acids, with low blood levels of these essential fats, and side effects like dry hair and skin. Several studies also provide evidence that omega-3 fats may help alleviate some symptoms of ADHD. In some children, adding omega-3 fats to the diet improves attention span and other ADHD symptoms. Other studies have shown that children who have learning difficulties that affect their reading, writing, and math ability might benefit from omega-3 supplementation. Fish that contain plenty of omega-3 fats include salmon, sardines, herring, mackerel, and trout. Fresh and frozen tuna, but not tinned tuna, is also high in omega-3 fats.

Fish is also rich in a number of minerals that support good health. Due to the mineral-rich composition of seawater, fish and other seafoods tend to be good sources of many essential minerals, including potassium, magnesium, iron, and iodine.

The importance of providing children with plenty of nutrient-rich food can’t be over-stated. It’s absolutely crucial that children have access to the nutrients they need to build strong, healthy bodies and minds, and the energy they need to stay active. Fish is an excellent source of protein and essential fats and nutrients to support growth and development.

The UK Department of Health recommends that we eat two portions of fish a week, including one portion of fatty fish like salmon or sardines. For adults, the portion size is around 140 grams, and for children, a smaller portion depending on their age and activity level. As well as this the Department of Health recommends a total of 1.5 grams of omega-3 fatty acids per week, which can easily be obtained by eating those two portions of fish.

This is a freelance article by Helen Bowes

Whilst we agree, there’s nothing quite like a  pancake covered in maple syrup, chocolate spread and banana to satisfy the sweet tooth! We believe savoury pancakes are often overlooked.

We’ve been busy in the kitchen coming up with our Seafood versions and we’re sure you’ll agree they don’t have to be restricted to Shrove Tuesday!

This is a basic pancake mix – blend the flour, eggs, milk, oil/melted butter and salt together to make a smooth batter – it should have the consistency of single cream. Different brands of flour behave differently so adjust by adding a little more milk to thin or flour to thicken.

Change the flavour and texture of the pancake by replacing the plain flour with Buckwheat Flour (this gives a gluten free pancake) – you may need a little more milk for this one. Try replacing half the flour with corn meal for a different textured pancake.

Ok then now for the interesting part! 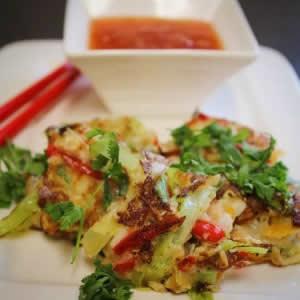 This uses a standard pancake batter but the pancake is topped with Regal Seafood Cocktail that has been defrosted and roughly chopped, 4 spring onions sliced along the length and chopped chilli – half to a full one depending on how hot you like it! It is served cut into bite size pieces with a dipping sauce made from soya sauce, rice vinegar, garlic, ginger with a bit of water to dilute. I would think sweet chilli sauce would go with it as well.

Method – Heat a splash of oil in a frying pan and pour in a layer of pancake batter. Scatter over half the chopped seafood, 2 sliced spring onions and a sprinkle of chopped chilli then drizzle over a little more pancake batter – save enough to make the second pancake. Cook the pancake until the base is golden brown then carefully turn over and cook until golden and cooked through. Repeat to make the second pancake. Serve cut into squares and serve with the dipping sauce.

For the next couple we need a basic white sauce recipe. Here’s what we went with…

In a saucepan – melt the butter and mix in the flour. Cook this mixture gently for 2 minutes and take off the heat before adding the milk gradually, whisking well. Bring to a gentle simmer for 5-10 minutes until the sauce has thickened. Reduce the amount of milk for a thicker sauce. Season to taste.

Use this sauce as a base for your pancake filling as suggested below. Try replacing half the milk with white wine for a white wine sauce or adding grated lemon zest and a squeeze of lemon juice along with chopped fresh herbs. 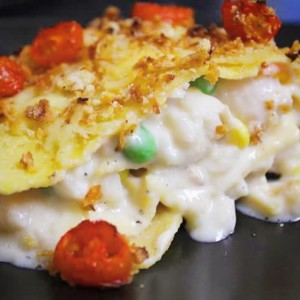 Next we layered up a white fish lasagne with pancakes instead of pasta sheets!

with the basic white sauce and a handful of frozen peas and sweetcorn.

We made 2 simple pancakes and topped half the fish mixture with a pancake before another layer of fish and topping with the second pancake. Once we had finished layering we topped with grated cheese, breadcrumb and some chopped baby tomatoes.

This was transferred to the oven for around 15 minutes at 180oC. 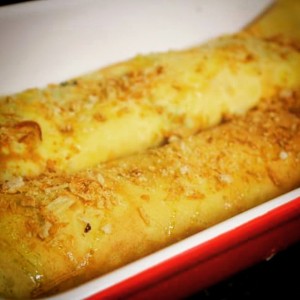 This isn’t any old Smoked Fish!! This is Traditionally Smoked Haddock from what is believed to be the oldest smoke house on Grimsby Docks, MTL fish curers.

We took 500g and cooked it for roughly  4-5 minutes in the microwave. We discarded the skin and chopped it up before adding a generous tablespoon of whte sauce, a handful of spinach and a sprinkle of grated cheese and then rolled it into 2 precooked pancakes.

We then sprinkled over a little grated cheese and breadcrumb. This is how the inside looked… 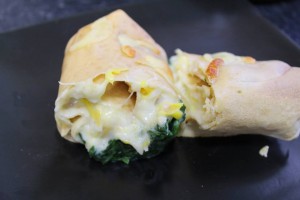 Next up is one of our personal favourites… 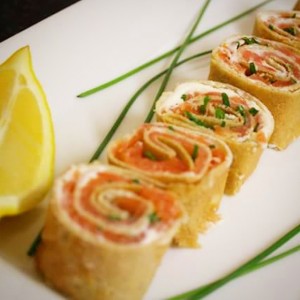 We made 2 pancakes and very simply laid 200g of delicious Scottish Smoked Salmon and a combination of cream cheese/ crème fraiche with a tiny squeeze of lemon juice. We then rolled them up and sliced into bite sized pieces. Before sprinkling chopped Dill over the plate.