The Chinese Lunar New Year takes place on Monday 8th February this year and a fifth of the World’s population will be celebrating. As well as the 1.3 billion Mainland Chinese, festivities will take place in countries as diverse as Indonesia, Vietnam and here in the UK in the Chinatowns of London, Manchester, Birmingham and Liverpool Chinatown, the first in Europe. 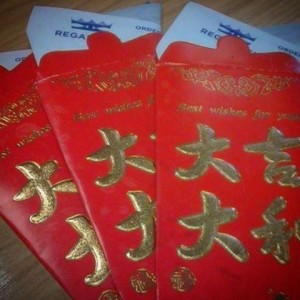 200 million Mainland Chinese are travelling home to their villages and cities to take part in a feast they call Reunion Dinner.

Fish plays a major role in the meal because their word for ‘extra’ and ‘surplus’ (yύ) sounds identical to their word for ‘fish’. Fish, therefore, symbolises prosperity and good fortune.

A whole steamed fish is always served at the New Year meal. The most common recipe involves seasoning the cavity and placing sliced ginger inside, then steaming until just cooked to the bone. Strips of spring onion and sometimes more ginger are placed on top of the fish before a ladle of hot fat is poured over the top to scold the fish skin and take a little of the bite out of the spring onion strips without cooking them. This will often be served as a course on its own with soy sauce to season and add savoury richness. However, to make this a main course you can serve this with boiled white rice. You might not want serve too much rice…many Chinese people believe it is bad luck not to eat every grain of rice served in the bowl!

You can use any whole fish but a fish with white flesh like sea bass would be ideal. 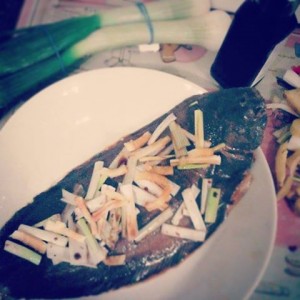 A whole dover sole prepared in the traditional Chinese style

Some families point the fish towards the guest of honour as a sign of respect. And more often than not they would save leftovers for the following day to boost the symbol of fish as a prosperous part of the meal.