He’s the font of all knowledge here at Regal Fish Supplies (if that’s the same thing as  being full of a fair mix of useless and useful information), very much the Father figure of the company and a person that members of the team go to when they are seeking advice on pretty much anything relating to Seafood or otherwise. So we felt, if we were to include a new ’meet the staff’ feature, Mr Stagg would be a great person to start with!

David joined the team in August 2007 and came in with a fresh approach. He asked      questions and wanted to know why we did what we did. He wasn’t prepared to accept a response such as ‘’because we’ve always done it this way’’ and he used his vast expertise within the industry to inject the company with a new outlook and he has helped the     company reach new heights.

We interviewed David last Wednesday in his office at our premises in Grimsby. He was in a particularly silly mood (as he often is) but we managed to get some sensible answers out of him (eventually)… 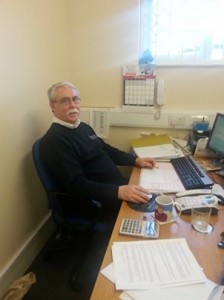 Here’s David hard at work in the office at Grimsby

What does a typical day at Regal Fish Supplies involve for you?

Well it’s difficult to say really. It could be a day of meetings, discussions, posting invoices, reconciling or making payments. My role is so varied that every day is different to the next.

What lead you to Regal and how did you learn your trade?

I worked for a firm of Chartered Accountants in Grimsby, a Trawling company (operating up to 20 vessels), an Oil Rig Stand-by vessel Operator (10 vessels) then I worked for a Fish Merchants for over 20 years.

How about your favourite Regal ready prepared product?

What do you like to do in your spare time?

I like to read; do, prepare or recover from Scouting Activities.

Could you tell us about the Scouting activities you’re involved with.

What is your biggest achievement and what are you most proud of?

Obviously I am most proud of my family but I am extremely proud of my work with the Scouts and have enjoyed helping hundreds of young people to have fun and hopefully learn something along the way.

Tell us something we didn’t know about you.

Finally what would be your favourite Quote?

Two Quotes by Lord Baden-Powell. The first relating to leaving a campsite, or anywhere else in fact  ‘’the only thing you should leave behind are your thanks’’ and in his last message to Scouts ‘’try to leave this world a little better than you found it’’ 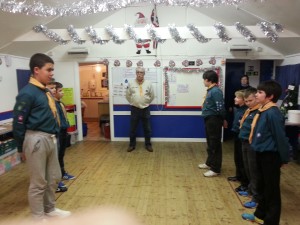 Thank you very much for your time David. We enjoyed finding out more about you. We’ll stop bugging you now and let you get back to work (or throwing paper aeroplanes at the other members of staff in the office!)