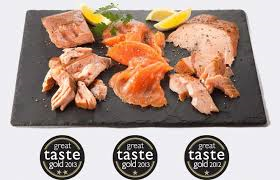 Loch Duart (supplier of our Oak Roasted Flaky Salmon aka Hot Smoked salmon) won the hotly-contested ‘Best Fish’ award when the well-known and popular Scotland Food and Drink Excellence Awards were presented at a gourmet dinner at the Doubletree by Hilton Dunblane Hydro Hotel on 24th May.

The range, which also won the “Best Seafood Product Line” award at the European Seafood Exposition in Brussels in 2011, was described by the judges as “an outstanding entry”, “great tasting products” with “moistness, smokiness and oily texture”.

This is the second time in four years that Loch Duart has won the prestigious ‘Best Fish’ award – Oak Roasted Flaky Salmon (now part of the extended range) won the award on its own in 2009. The awards, run jointly by Scotland Food & Drink and the Royal Highland and Agricultural Society of Scotland, have been recognising and rewarding the very best in Scottish food and drink for many years and continue to be considered a true badge of excellence.

The entries were judged by an expert panel of industry representatives, journalists and marketers who had an even tougher job this year with every product entered being tasted.

In total, more than a dozen of Scotland’s most innovative and respected companies took home the spoils at Scotland’s food and drink ‘Oscars’. Scottish Rural Affairs Secretary, Richard Lochhead, said: “The Excellence Awards celebrate our many culinary successes and truly showcase Scotland as a land of food and drink. I’d like to congratulate this year’s winners and hope they continue to go from strength to strength.”

James Withers, Chief Executive of Scotland Food & Drink, said “The Excellence Awards provide an inspiring snapshot of everything that is great about Scottish food and drink – from mouth-watering products to innovative companies and inspiring people.”

Nick Joy, Managing Director of Loch Duart Ltd, said “We are delighted with this award which recognises the quality of the complete range. Loch Duart is proud to invest in maintaining the Hebridean heritage of quality food production and proud to be producing such high quality products.”

Loch Duart is a salmon farming company founded on principles involving the best environmental and fish welfare practises to produce an outstandingly good tasting fish.  Putting our ethos into effect requires a suite of ground-breaking initiatives based on optimum fish welfare, the best quality sustainable feed, highest standards of husbandry and the maintenance of an as-close-to-pristine environment as possible. These methods yield a leaner, tastier fish that is more akin to a “wild salmon” taste than to a normal farmed salmon.  The farm was the first-ever fish farm to be approved by RSPCA Freedom Food and is ISO 14001 accredited.

In March 2006, Loch Duart won the Gold Award for the Best Food in the inaugural DailyTelegraph ‘Taste of Britain’ Awards. Loch Duart salmon is served by name on the menus of Rick Stein’s Seafood Restaurant, Galvin at Windows, Tom Aikens and the Feng Sushi group. Our salmon is also served in The French Laundry in Napa, California, Gordon Ramsay’s Maze and Claridges restaurants – and many, many more.